Connecting, teaching and inspiring others to cook whole foods at home with passion is what I love. Keeping it fresh & fabulous in all realms is my mission!

Chef Ilona's Blog
Connecting, teaching and inspiring others to cook whole foods at home with passion is what I love. Keeping it fresh & fabulous in all realms is my mission!
View Full Blog

Kitchen Makeover!
I have taken on the role of Culinary Director at The Alley to bring my signature eclecticism, and playfully fresh take on cuisine in my latest Culinary Branding experience. Expect big flavours you can enjoy on and off of the lanes!

Ask Islanders, PEI Culinary Ambassador
I'm honoured to have been asked to be a Prince Edward Island Ambassador as part of the new Tourism PEI 'Ask An Islander' marketing campaign. I'm looking forward to answering tourist questions about PEI and sharing all my inside secrets on the best ways to experience our Island culinary!

Click here for my Ambassador profile, or watch this video about the idea.

"Sign up for one of the day-long workshops at Holland College’s Culinary Institute of Canada and feel like a pro for a day. For the Island Flavours class, you’ll help chef Ilona Daniel oversee every part of the meal: visiting the local market for ridiculously fresh ingredients like lobster straight from the ocean and famous P.E.I. potatoes, cooking dishes like whitefish chowder and wild-blueberry compote with biscuits, and plating it all beautifully. At the end, enjoy an unforgettable Island feast."

My Island Bistro Profile
A big thank you to Barbara from the popular blog 'My Island Bistro' for her profile on yours truly. It was fun getting to know Barbara, and discovering that we both live to be "outside the box". For Barb's blog, click here.

Bon Appetit
I was invited on behalf of tourism PEI to cook a summer seafood luncheon at bon appetit magazine HQ in NYC. I cooked for editors, photographers, bloggers, and writers for the publications housed in the Conde Nast Building in Times Square. There were 125 guests in total. Check out my blog on the fun day!

Fall Flavours
I'll be a part of the Signature Fall Flavour's Event "Oysters on the Pier", hosted by Food Network personality, Chuck Hughes. I'll be serving up my Double Smoked Bacon and oyster brushetta, and a sparkling oyster shooter.

Learn tricks of the trade from an internationally trained chef, while laughing, and taste-testing as you go. Recipes for this custom package will draw from Asian-Maritime Fusion, so expect lots of PEI's best seafood presented in unexpected formats.

Talking Beef
As one of the first chefs profiled with Canadian Beef's 'Chefs #LoveCDNBeef' Q&A, it was great to talk about my love of beef and my favourite ways to work with it! Click here to read the full Q&A. X

Where to eat in Charlottetown? Check out my piece written for Discover Charlottetown to plan your ultimate foodie weekend! 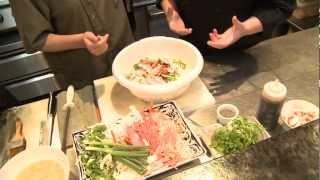 On the Job
On this episode of NEXTnetwork's On The Job, Ilona show the host how to make tasty spring rolls. NEXTnetwork is a unique career planning initiative created for young people in Prince Edward Island.

Next Network
I was asked to share my personal career path with young people looking to carve out a path of their own. This was for next tv network. Chef Ilona dishes up some wisdom